History of the Ombuds Role at the University of Iowa

Evidently, Huit started referring to himself as an “unofficial” or “self-appointed” ombudsman in 1971.  He was formally appointed to the role by President Sandy Boyd on July 10, 1973.  From 1973 to 1978, he served both as the Dean of Students and Ombudsman for Students.

There are many parallels between Huit’s conception of his role and generally accepted current guidelines for organizational ombuds (which serve a given organization such as a university or college).  For example, Huit talked about his role as being:

These principles are identical to the Code of Ethics of the International Ombuds Association, the largest and best known association for organizational ombuds.  Huit emphasized his informality by not meeting with students behind his desk.  However, it seems that some concern was expressed on campus that his independence was compromised by his role as an administrator.  Current recommendations for organizational ombuds serving colleges or universities are that they not have other roles that might conflict with the ombuds function.

Huit also talked about the strategies he used in the Ombudsman role, including listening, developing trust, providing alternatives, investigating, and mediating.  In addition to referring to himself as a mediator and investigator, he also called himself a “complaint machine” and a “one-man crisis center.”  The only difference between Huit’s description of his role and that of modern organizational ombuds is that ombuds do not typically carry out investigations.  As organizational ombuds typically do, Huit stated that it did not matter how large or small the problem was, he was ready to help.  He was quoted by the Daily Iowa on 3/15/76 as saying “My role as ombudsman is simply to make it possible for a student who has a complaint or problem to come in and seek redress.”

In 1975, Huit saw between 250 and 300 visitors in his Ombudsman role, which compares favorably with the 600 or so cases handled by the one full-time and one half-time ombuds currently staffing the current Office of the Ombudsperson.

Huit was highly regarded for his leadership, integrity, kindness, and empathy for students. These traits were very evident during the campus unrest in the 1960s.  Huit continued to interact with students during the protests in an active and caring way.  The photo below, in which Huit lights the cigarette of a student protester, is very revealing of his character. 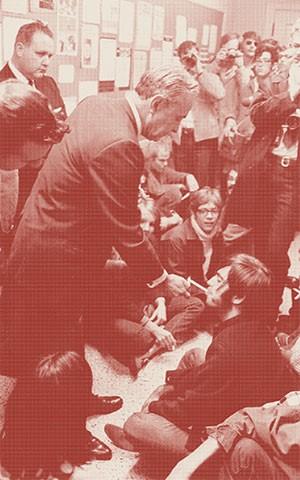 According to the UI Alumni Association, when Huit retired in 1978, Omicron Delta Kappa and Mortar Board established the M.L. Huit Faculty Award to “recognize his outstanding dedication and attentive service to students.” Each year, a faculty member “whose contributions best characterize those that Huit has consistently engendered in both his personal and professional life” is chosen to receive the award.

Office of the Ombudsperson

In March, 1973, the University entertained a proposal for an Ombudsman that would serve all of campus, but the idea was dropped due to lack of funding.  Huit’s appointment later that year required no extra funding but was limited to serving students.

In 1982, four years after Huit retired, former University of Iowa President James Freedman came to campus from the University of Pennsylvania, where he had served as ombudsman.  Upon discovering that UI did not have an ombuds office, he encouraged the Faculty Senate to advocate for establishing one.  The Faculty Senate appointed an “Ad Hoc Committee on the Ombudsperson’s Office” to study the issue, and the committee developed a proposal for a UI ombuds office dated January 24, 1985.  The proposal states:

“We therefore propose the creation of an Ombuds-office (OMB) to serve as a resource for all those in the University community who require information or help in resolving a problem.  This office shall serve an informational and a conciliatory role, and shall be impartial towards all groups that make up the University.  It is essential that the office be widely viewed as informed, helpful, and fair in its efforts to resolve problems.  The OMB must be independent of the existing administrative structure… “

The proposal made a case for the importance of informal conflict management and emphasized the need for the Ombuds Office to be neutral and independent.  The Faculty Senate proposal described the scope of the office as serving students, faculty and staff, and pointed out the two primary functions of ombuds offices:  working with individual visitors and identifying and seeking to address trends, or “patterns of discontent,” within the University.  The University of Iowa Office of the Ombudsperson began operation on October 1, 1985.  In addition to its informality, neutrality, and independence, the first annual report of the office, released in January 1987, stated that the office maintained confidentiality, thereby adhering to the current Code of Ethics of the International Ombudsman Association.

Since 1985, ten faculty and three staff have served as Ombudspersons.

*Much of the material in this article came from different issues of the Daily Iowan.